When it came to losing the leading lights of pop culture, 2016 seemed particularly cruel. Those luminaries who helped shape both our culture and our lives, seemed to passed on with alarming frequency and while it may be a little reductive to see this as a specific of a troubling year; it’s worth taking a moment at the beginning of a new year to celebrate those amongst the Doctor Who community who passed away during the past twelve months. 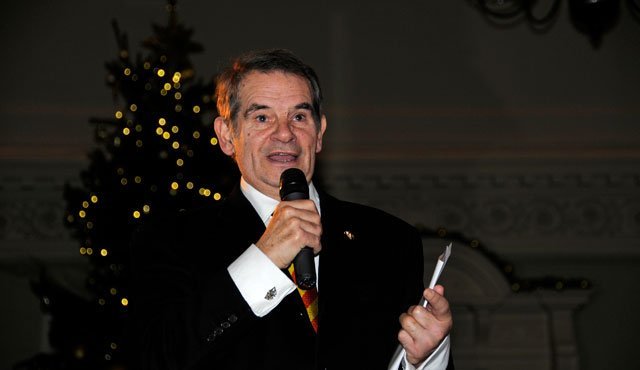 The ‘Voice of Lords’ Johnny Dennis played the bus driver Murray in the 1987 serial Delta and the Bannermen. He was an actor by trade; appearing in such TV shows as The Bill, The Devil’s Crown, The Enigma Files, Prospects, Dempsey and Makepeace, Surgical Spirit, and Conjugal Rights.
He was perhaps best known for his love of Cricket. Dennis was affectionately known as the ‘Voice of Lords’ having been the MCC’s senior announcer for 18 years. It was whilst playing for Lords Taverners that he met Test Match commentator Brian Johnston, who recommended him for the role. When the incumbent announcer Alan Curtis became unavailable owing to an acting engagement in a Carry On film, Dennis took over. This led to a career spanning some 38 years and some 136 test matches. He finally retired in 2014. 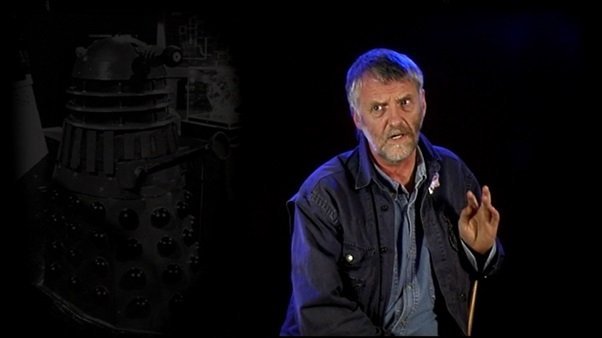 Television director Ken Grieve was the man behind the camera for Destiny of the Daleks, which saw the reintroduction of the Daleks to the series, after a gap of four years, and the return of Davros.
He taught at the National Film School and the Manchester Film School, and his credits included Coronation Street, The XYY Man, Buccaneer, Crown Court, Game, Set, and Match, Bergerac, Bugs, Peak Practice, The Bill, and the Casualty episode Stormy Weather.
He was also responsible for location footage used in the opening credits of Coronation Street used between 1976 and 1990, which included the first Corrie cat. Comic Book artist Steve Dillon was a regular contributor to Doctor Who Magazine, then called Doctor Who Weekly, in the 1980’s where he created the character of Abslom Daak and Kroton with writer Steve Moore.
Dillon was best known for his work with writer Garth Ennis, including the critically acclaimed Preacher as well as Hellblazer and The Punisher. 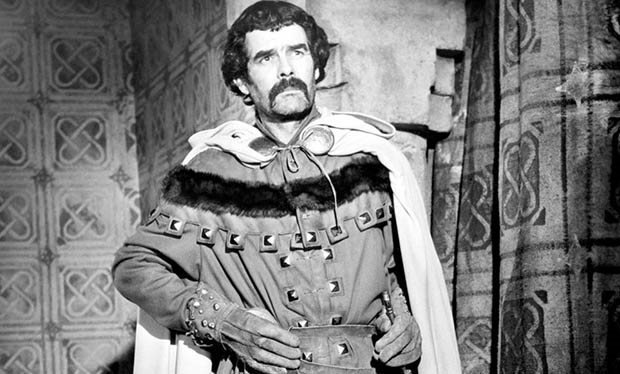 Actor Terance Bayler made two appearances in Doctor Who. In 1966 he played Yendom, one of the Monoids’ slaves, in the First Doctor story The Ark. In 1969 he returned to the series playing Major Barrington, an officer in the British Army, in the final Second Doctor story, The War Games.
Bayler also appeared in such television shows as Hamlet, Moonstrike, Compact, Maigret, Ivanhoe, The Brothers, Upstairs, Downstairs, The Hunchback of Notre Dame, The Squad, London’s Burning, The Bill and Dangerfield.
He is perhaps best known for a brief cameo in Monty Python’s The Life of Brian where he declared that ‘I’m Brian and so’s my wife’. He also played the Bloody Baron in the Harry Potter films. 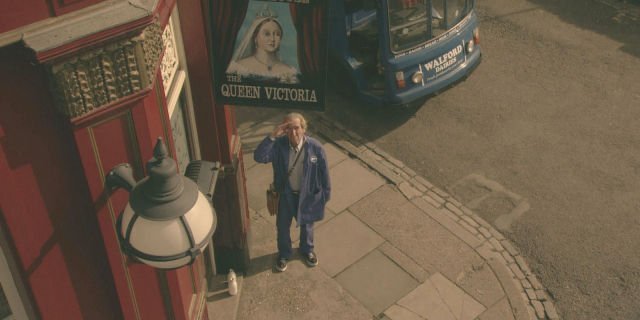 Actor Micheal Leader was perhaps best known for his 31-year stint as EastEnders extra Michael the Milkman. A frequent background artist, as well as appearing in several 1980’s Doctor Who serials including The Leisure Hive, The Visitation, The Kings Demons, and Mawdryn Undead (Peter Davison often spoke warmly of him) he is perhaps best known to sci-fi fans as the Stormtrooper who bangs his head on a door in Star Wars Episode IV: A New Hope – although that accolade was contested by a fellow extra. 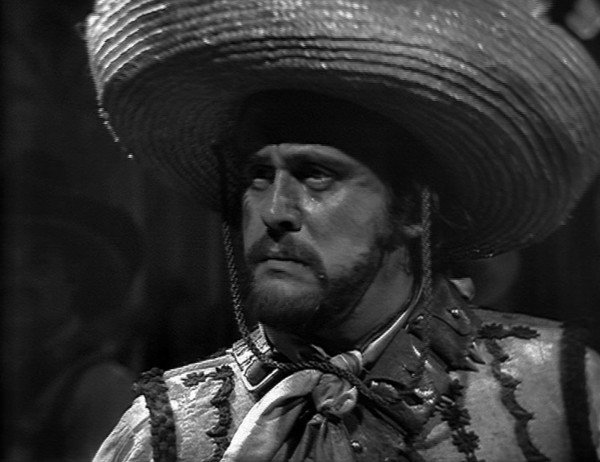 Actor Napier-Brown appeared in the 1969 Second Doctor serial, The War Games as Arturo Villar, a soldier plucked from the Mexican Civil War who helped the second Doctor in his battle against the War Lords.
A distinguished television and theatre actor, he also appeared in Maigret, Ivanhoe, Secret Army, The Dick Emery Show, Terry and June, 1990, and Casanova. 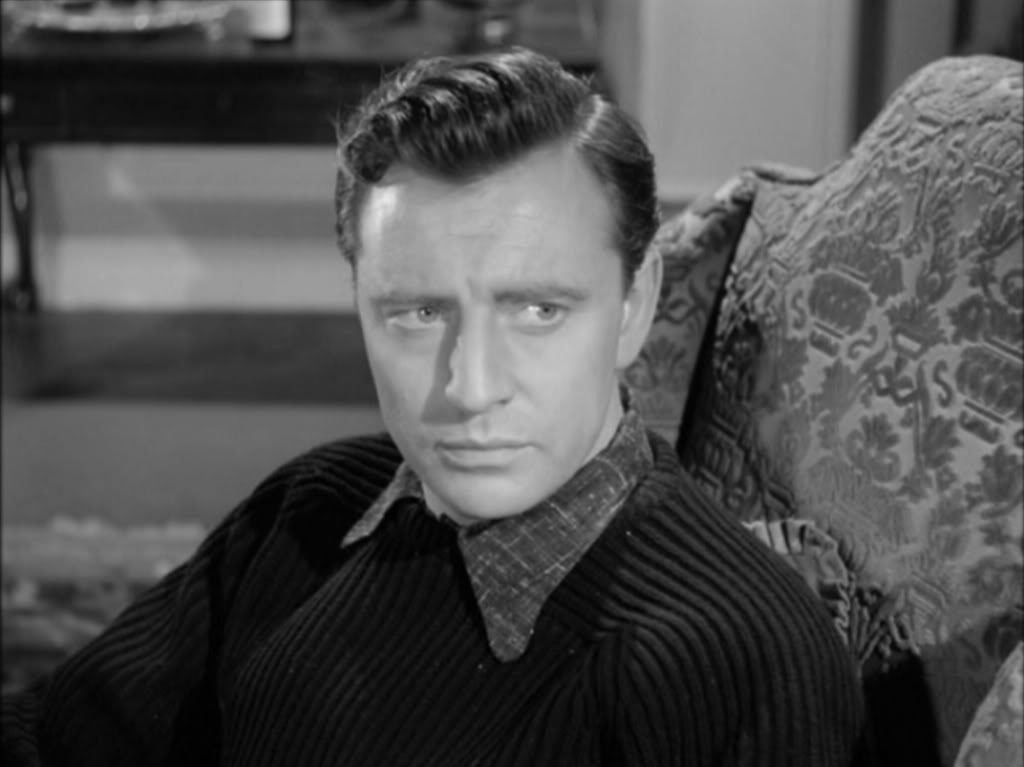 Actor Lucas played Range in the 1984 Doctor Who story Frontios. He took over the part shortly before the story was recorded following the murder of the original actor Peter Arne.
Best known as Dr James Gordon in the TV series The Adventures of Black Beauty, Lucas was a regular on British television, appearing in over 100 different drama productions. He played John Friend in The Infamous John Friend, Detective Inspector Mitchell in Flower of Evil and Days of Vengeance and Eddie Prior in The Prior Commitment. He had regular roles in Coronation Street as well as the ill-fated El Dorado. 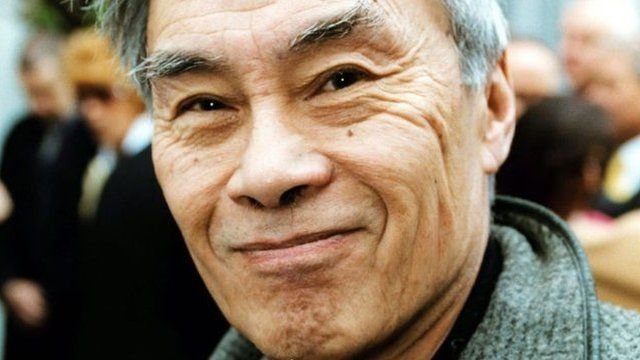 Actor Kwouk played role of the Mandarin leader Lin Futo in Four to Doomsday, acting alongside Peter Davison in his first filmed story as the Doctor. Kwouk would later return to Doctor Who as Doctor Hayashi, again alongside Davison, in Big Finish’s Loups-Garoux.
Kwouk is known around the world for his iconic portrayal as kung-fu servant Cato whose ambushes against Peter Sellars’ Inspector Clouseau became the highlight of many Pink Panther movies.
He also appeared in two of Sean Connery’s James Bond films, Goldfinger and You Only Live Twice, as well as the independently produced Bond spoof Casino Royale alongside David Niven and Sellars. 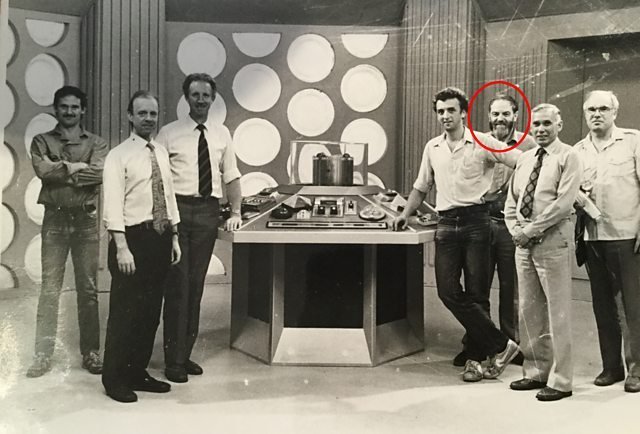 Former Senior Camera Operator, Alec Wheal worked on at least 159 episodes of Doctor Who, mainly as Senior Camerman, or as it was later known, Camera Supervisor.
Alec Wheal led the Camera teams, which consisted of five or six camera operators who, under his guidance would have to absorb he director’s camera script and instructions, before recording each Doctor Who episode in the evening.
Wheel worked on most Doctor Who stories from Destiny of the Daleks in 1979 right through to The Greatest Show in the Galaxy in 1988. 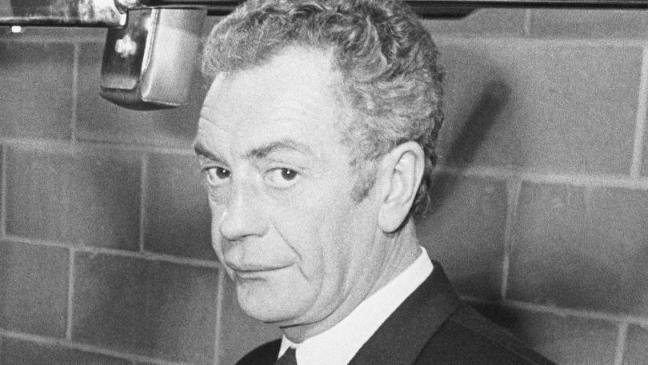 Actor Barry Howard played Oliver Barnes, one of the Sliver Cloak gang, in the 2010 story The End of Time.
Howard was best known as professional dancer Barry Stuart-Hargreaves in the BBC Comedy Hi-Di-Hi, a role he played in seven series from 1980-1986.
Other roles included parts in Terry and June, You Rang, M’Lord?, Dad, and The House of Windsor. Actor Gareth Thomas may have played Ed Morgan in the 2006 Torchwood story Ghost Machine and featured in the 2001 Big Finish production, Storm Warning; but his legacy will be his performance as the eponymous hero of the 1970’s science fiction series Blake’s 7.
Thomas played Roj Blake, leader of a disparate band of rebels, pitted against a corrupt federation, in the series conceived by Doctor Who writer, and Dalek creator, Terry Nation. The series ran on BBC One from 1978-1981, with Thomas taking the lead role for the first two series before being killed off due to Thomas’ refusal to sign a new contract.
Outside of Blake’s 7 Thomas played Philip Denny in the 1983 version of A.J. Cronin’s The Citadel and took the lead in the BBC One drama Morgan’s Boy, about a Welsh hill farmer who finds himself looking after a teenage boy, a performance which won him his second BAFTA nomination.
He appeared in By the Sword Divided and Knights of God and had a regular role in the ITV series London’s Burning. In 1998 he took on the role of Nathaniel Clegghorn in Heartbeat.
In 2012, Thomas returned to the role for which he was best known, playing Roj Blake in the Big Finish Production, Blake’s 7: The Liberator Chronicles.

Actor Reg Whitehead was best known in Doctor Who for having played the first Cyberman to be seen on screen, during their invasion of the Antarctic base in The Tenth Planet; he went on to inhabit the insides of Cybermen for their successive stories The Moonbase and The Tomb of The Cybermen, and then as a Yeti in their debut story The Abominable Snowmen.
Outside of his costumed appearances he has also stared in Z Cars, The Power Game, The Avengers, The Saint, and Counterstrike. 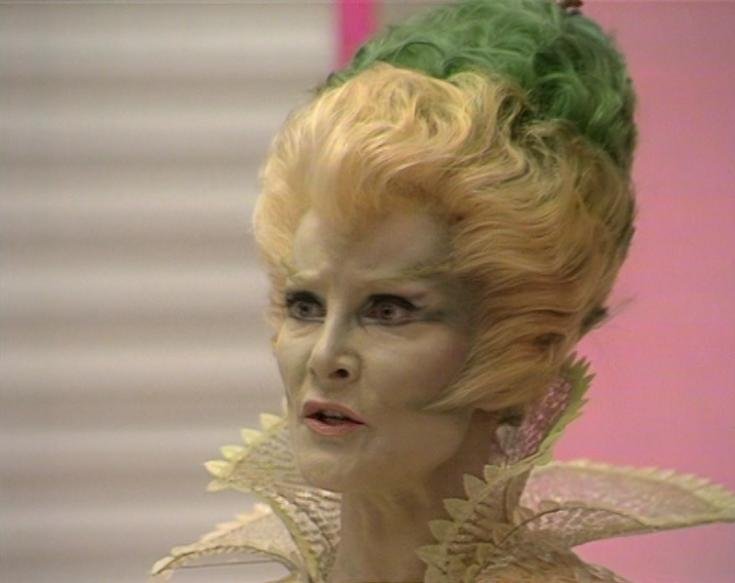 Actor Corri played Mena in 1980 story The Leisure Hive, the first story of Tom Baker’s last Doctor Who season.
She also appeared as Mrs. Alexander in the 1971 Stanley Kubrick film A Clockwork Orange. She played Lara’s mother in David Lean’s 1965 film Dr. Zhivago and appeared in the Otto Preminger thriller Bunny Lake is Missing.
Other films include Devil Girl from Mars, The Tell-Tale Heart, A Study in Terror and Vampire Circus. She played Therese Duval in Revenge of the Pink Panther. 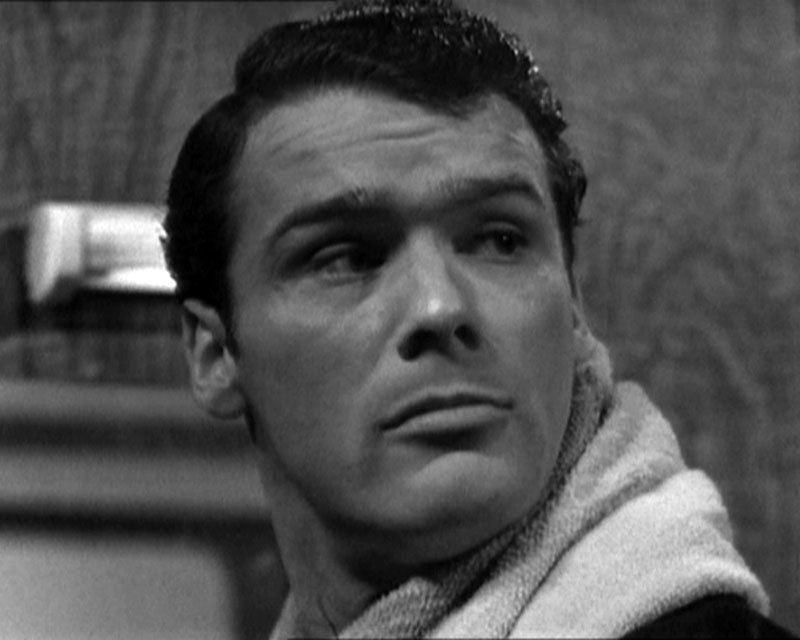 Actor Jon Rollason appeared as Harold Chorley, the television journalist who covered the attacks on the London Underground in the 1968 story The Web of Fear.
Rollason also appeared in The Children of the New Forest, The Avengers, Swizzlewick, Z Cars and Softly Softly before joining Coronation Street in 1966 as Dave Robbins, a teaching colleague of Ken Barlow.
He also wrote two episodes of Crossroads and in 1969 created a two-part series Special Project Air for the BBC, starring Peter Barkworth, produced by Doctor Who‘s Peter Bryant and with music by Dudley Simpson. 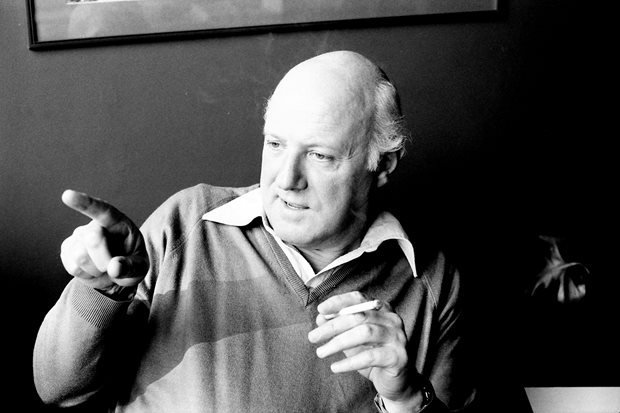 Writer, Producer and creator of the Zygons, Robert Banks Stewart created some of the best loved series on British television.
Starting out as a script writer on the likes of Danger Man, The Human Jungle, Top Secret, The Sweeney and The Avengers; in 1975 he was asked to write for Doctor Who, creating Terror of the Zygons, a classic serial that first introduced the shape-shifting Zygons.
After the success of Terror of the Zygons, he went on to write The Seeds of Doom introducing the Krynoid and the deranged horticulturist Harrison Chase.
He went on to create such beloved series as Shoestring, Bergerac and brought H. E. Bates’ novel The Darling Buds of May to the small screen for ITV; one of the highest rated new series in television history. 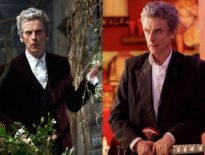 Features Why I Consider Heaven Sent/Hell Bent As A Two-Part…
Features Night Study: Here's What You Thought of Night…
6
%d bloggers like this: