The Many Non-Appearances of Tom Baker

Tom Baker has given a vast amount of his life to Doctor Who, and that’s an admirable thing. His tenure as the Fourth Doctor spanned seven years, while he’s also worked for various audio projects, and spent many a day at conventions, signing that photo of himself with a line of Daleks, regaling tales of how awful the Robots of Death script was, and listening to endless anecdotes about hiding behind settees.
But he’ll also be remembered for a decision he made shortly after he left Doctor Who, and we’re forced to question whether it was indicative of his relationship with the show… The decision I’m referring to is, of course, not appearing in The Five Doctors, the series’ 20th anniversary which invited previous Doctors back. Only two previous incarnations turned up, however: alongside Peter Davison’s then-current Fifth Doctor, Patrick Troughton reprised his role as the Second, and Jon Pertwee as the Third. William Hartnell had passed away in 1975, leaving Richard Hurndall to instead play the First Doctor.
And Tom Baker refused the offer to return. The Five Doctors became The Three-Point-Five Doctors, which didn’t quite have the same ring to it.
Instead, Tom Baker’s part was filled by none other than Tom Baker. Albeit old footage of Tom Baker. Punting on a river. With Romana in tow.
This was left over from the never-screened serial, Shada, which was only partly filmed due to BBC strike action. We could technically say The Five Doctors was co-written by Terrance Dicks and Douglas Adams, but don’t ever admit to mulling that notion over, especially not on a Doctor Who site about the times Tom Baker didn’t show up. That would be embarrassing and reach Peak Anorak. 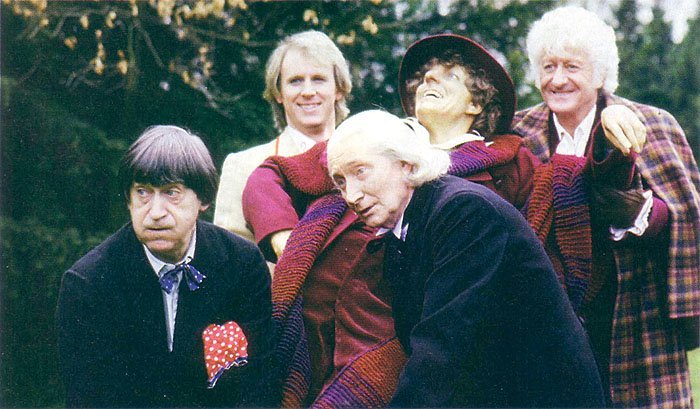 Well, he wasn’t in The Five Doctors, so it’d be pointless showing up for the publicity shoot, wouldn’t it? It’s the exact same reason Glenn Hoddle, Sylvester Stallone, and Nicola Kidman didn’t turn up for the publicity shoot: they weren’t in The Five Doctors.
Coincidentally, the Doctor Who production team did the exact same thing as Hollywood Big-Wigs do when booking Sylvester Stallone. They used a waxwork.
The dummy was dressed in the Fourth Doctor’s Season 18 look, so if anyone thought his grin was forced, his eyes fearful, and his face the picture of pure terror, they could ration that he’d just been asked what he thought of Meglos.
The waxwork was taken from a nearby Madame Tussauds, where it was being used as a double for Cilla Black.
The other cast members taking part in the photocall seemed to have fun around the fake Fourth Doctor, but photographers found it difficult to make it look realistic; after all, in every shot, Tom was exactly the same. They cameramen called this “The Mannequin Challenge,” which is a term now better associated with Keeping Up With The Kardashians.
Peter Davison pitched the idea of using the dummy for a future Auton story, but producer, John Nathan-Turner turned it down, noting, “No one would believe that thing could move.” 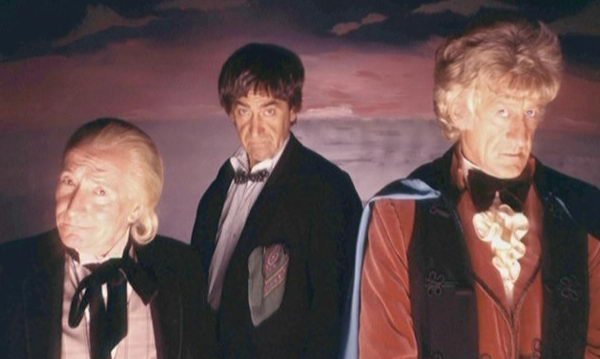 Tom couldn’t even be bothered to make an appearance in the 10th anniversary special. He obviously has a thing about multi-Doctor stories.
I know what you’re going to say: “But the Fourth Doctor didn’t even debut until Robot, about a year after The Three Doctors!” I counter with, that didn’t stop Peter Capaldi turning up in The Day of the Doctor.
“Ah,” you might say. “But Tom wasn’t even cast at the time The Three Doctors was recorded.”
I counter with, shut up. Proof, if further were needed, that Tom Baker despises stories with multiple incarnations of the Doctor. Peter Davison learned that The Day of the Doctor, the 50th anniversary episode, wouldn’t feature previous incarnations of the Time Lord, apart from David Tennant, who had convinced writer, Steven Moffat to include him using the same skills he employed in Jessica Jones (good acting, I mean. He didn’t make him eat a phone or anything. To my knowledge.).
Davison’s obvious reaction was writing a comedy spoof that proved just as enjoyable as the full episode. He gathered together his Doctor Who buddies, and created The Five (Ish) Doctors Reboot, actually starring six Doctors: himself, Colin Baker, Sylvester McCoy (he’s in The Hobbit), Paul McGann (work permitting), David Tennant, and Matt Smith (briefly).
Peter Cushing even gets a mention!
But where was Tom? Stuck in the sodding time vortex again. Which is one of the many regrets in his life.
Davison originally wrote a scene for Baker, but the latter didn’t seem up for it, so instead, good old Shada was used again, with added Jon Culshaw. Speaking of the impressionist and actor… Spoilers if you’ve not listened to this 2006 audio adventure!
Proving he’s a dead ringer for a certain curly-haired Time Lord, Culshaw crops up in The Kingmaker, a Fifth Doctor story that also features the Fourth. Sort of.
As you might’ve gathered, Culshaw does his famous Baker impression, reading out notes from Doctor Who Discovers Historical Mysteries. In a serial about the death of young princes, an oasis of Tom was quite a surprise, but this Tom was actually not Tom; he just sounded like Tom. This was because Tom wasn’t working for Big Finish back then. 81 releases in, and this was our first taste of the Fourth Doctor in the Main Range.
The Nev Fountain-penned story proved too timey-wimey for some, being more divisive than the 2017 political landscape. Or indeed, the 2006 political landscape. Or, yes, the 1485 political landscape. There was rioting in the streets when Tom Baker dug deep, and became the Fourth Doctor again for Big Finish in 2011. But the good type of rioting. More like a flash-dance than anything. Kevin Bacon was even involved, albeit in a minor capacity, as was Ross Poldark, albeit in a miner capacity.
His first Big Finish work was a two-tale boxset that told of Lost Stories, namely The Foe from the Future (Tom shares his birthday with the inauguration of Donald Trump) and The Valley of Death, and in 2012, he started regular Fourth Doctor Adventures, which continue today.
Before 2011, Big Finish was a barren section of the Who universe, filled only with hundreds of stories for Doctors Five, Six, Seven, Eight, and, if we include The Companion Chronicles, also Doctors One, Two, Three, and Four. Tom simply wasn’t sure about once more playing a part he’d given up back in 1981.
It’s about damn time, Mr. Baker. If you haven’t guessed already, this was all supposed to be read with tongue firmly in cheek. Try it, but don’t blame me if you bite yourself.
Tom’s synonymous with Doctor Who, and he really has given a large chunk of his life to the show – as have all the other Doctors. Such was his devotion to the series that he even penned a never-to-be-made film, Doctor Who Meets Scratchman, alongside Ian Marter (Harry Sullivan) and James Hill (Worzel Gummidge). It’s sad that The Five Doctors remains a dubious part in his legacy, but he has since admitted that he made a mistake:

“I turned down The Five Doctors because it wasn’t long since I’d left – I had left Doctor Who because I think I’d run my course. I didn’t want to play 20 per cent of the part. I didn’t fancy being a feed for other Doctors – in fact, it filled me with horror. Now, of course, if someone asked me to do a scene with some other Doctors, I think, if they let me tamper with the script, it would probably be quite droll. I would think about that, yes.”

The 20th anniversary special hasn’t stopped the Doctors meeting up elsewhere, whether that’s at conventions or advertising a Golf Estate.

And of course Tom did return – as the Curator in The Day of the Doctor, something which he had to keep secret, even from his peers, hence him not appearing in The Five(Ish) Doctors Reboot.
We can laugh at his non-appearance in The Five Doctors, but in the end, what really matters is his long tenure as the Fourth Doctor, and not any dubious anniversary episodes.
Goodbye my dears…!

The Many Non-Appearances of Tom Baker