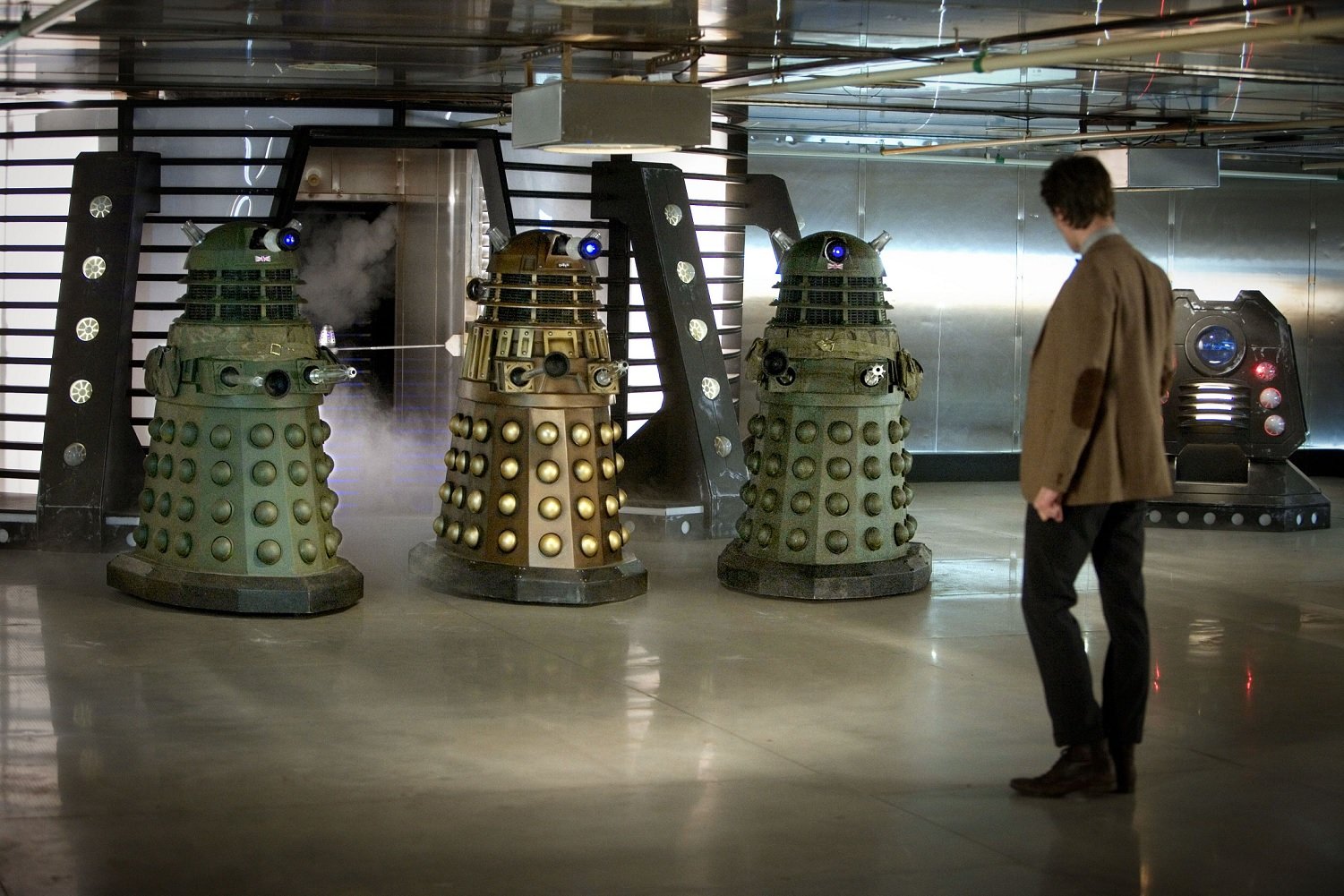 And here’s the answer:

This is still the case today. But let’s investigate why that is…

There’s little doubt that Terry Nation would have liked it to happen (had he been asked, but there’s no evidence he was, exactly). Nation was responsible for the script which introduced the Daleks in the second story of Doctor Who; after rewrites, it eventually aired between 21st December 1963 and 1st February 1964.

Nation is generally credited as the “creator” of the Daleks; Who historians are often rather hesitant about using this term because it overlooks the enormous contribution of others in the eventual realisation of Skaro’s finest. The Daleks as we know them are probably best thought of as the result of a team effort; there’s no single person who can really claim sole credit as their creator. They’re the product of a collaboration between writer, designer, voice artist and voice designer, and director.

Nation’s description of them in the original script is vague; indeed, some of his ideas were deliberately dropped (he said they moved “on a round base” – they didn’t – and “they carry strange weapons in their hands” – they don’t). A huge amount of the Daleks’ success comes from Raymond Cusick’s iconic design; had the BBC gone with some of the earlier concepts, the Daleks would have been risible and quickly forgotten. Associate Producer Mervyn Pinfield even seems to have suggested that they could be big cardboard tubes with an actor inside to push them around – nice and cheap, but very silly. Cusick played at least as important a role in the Daleks’ creation as Nation did; actually, his contribution is probably greater. But even this is to overlook the roles of the BBC Radiophonic Workshop in creating the grating electronic voice – again, a key ingredient in the Daleks’ success – and Peter Hawkins, the main original Dalek voice actor, in providing the characterisation. And then there’s Christopher Barry, the main director of the story, who brought all those contributions together and provided the final seal of approval.

So, rather than say Terry Nation was the creator of the Daleks, it’s more accurate to say that the Daleks were created by the team of Nation, Cusick, the Radiophonic Workshop, Hawkins, and Barry – with Cusick and Nation, in that order, making the greatest contribution.

In the programme’s early days, then, Terry Nation was one of a number of freelance writers who were commissioned by story editor David Whitaker to contribute to Doctor Who. Nation never rose above this status; he never negotiated a contract with the BBC to state that he must contribute to every season, or that the Daleks should appear in every season. While it’s true that Whitaker mused that Nation could be appointed one of the programme’s senior writers, this never came to anything.

Because he wrote the scripts that introduced them, Nation retained the copyright for the Daleks (though the design was the BBC’s copyright); as a result, the BBC required his permission if they included them in a script he didn’t write. Even today, each time the Doctor meets the Daleks, the BBC has to secure the agreement of Nation’s estate.

It’s true that, in the 1970s, Nation did indeed approach Robert Holmes to say that he thought the Daleks should feature in every season. It’s not clear whether this happened during Pertwee’s last year as the Doctor, when Holmes was trailing Terrance Dicks as the programme’s script editor, or during Tom Baker’s first year when Genesis of the Daleks was in pre-production and Holmes was fully in post. Holmes dismissed Nation’s idea because he hated the Daleks. In fact, many of the people who worked on Doctor Who didn’t like the Daleks at all, finding them variously boring, cumbersome, monotonous, and difficult to act against. Those who have voiced misgivings about Skaro’s finest include Peter Purves (companion, Steven Taylor), Jon Pertwee (the Third Doctor), Nick Courtney (the Brigadier), Philip Hinchcliffe (Producer), and (to some extent) Producer, John Nathan-Turner.

In fact, there’s a strong case to be made that the Daleks were essentially William Hartnell monsters, who made occasional come-backs for the other Doctors in Classic Who – though you could probably except Pertwee from this generalisation. It wasn’t until NuWho that they were re-established as the regular big baddies.

A few statistics might help. Have a look at this:

Number of Dalek episodes in Classic Who, Doctor by Doctor.

This episode count is for the Dalek stories only; I’ve not counted episodes where they make only cameo appearances.

* The back-to-back stories Frontier in Space and Planet of the Daleks both had 12 episodes; they were conceived as another 12-part Dalek epic, repeating the success of The Daleks’ Master Plan in 1965-6. However, as the Daleks don’t actually show up until part six of Frontier, I’ve only counted one episode as a Dalek story. If you want to count the whole of it, simply add 5!

Interesting, eh? The stats make a strong case for the Daleks being the big bads only in Hartnell’s time. And if you like this sort of thing, we can do a bit more number crunching and draw some more conclusions (again, using the counting caveats indicated by the asterisked notes above):

In NuWho (that is, 2005- present), it’s worth saying they pop up much more often than they did in the classic series. Every Doctor from Eccleston to Whittaker has encountered them (or one of them, in Jodie’s case, at least until this Christmas). These include Dalek, Bad Wolf/ The Parting of the Ways, Daleks in Manhattan/ Evolution of the Daleks, Victory of the Daleks, Asylum of the Daleks, Into the Dalek, The Magician’s Apprentice/ The Witch’s Familiar, and Resolution.

Notably, they didn’t appear in any of the David Tennant specials from 2009-10, after the Dalek extravaganza of The Stolen Earth/ Journey’s End (2008). There were no Dalek stories (though there were cameos) in Series 6 and Series 10, respectively, there were brief scenes featuring at least one Dalek in The Wedding River Song and The Pilot. Series 11 and 12 had no Dalek stories either, though the New Year’s Dalek episode, Resolution was broadcast between the two, and is classed as Series 11. Presumably, Revolution of the Daleks will be classed as Series 12.

Indeed, there was a court case debating who owned the rights to the Daleks. In April 2008, it concluded that they were the property of BBC Worldwide, at least when it comes to publishing rights.

The issues of contractual rights arose around the 2005 revival of Doctor Who, in which the BBC was refused rights to use the Daleks following the death of Terry Nation in 1997; fortunately, an agreement was made between the BBC and the Nation estate so that they could return with the programme. The exact details have never been revealed, but it’s been frequently denied that it includes a clause to include the Daleks every season. Indeed, Steven Moffat said at the Royal Television Society in 2014 that “You certainly don’t wheel the Daleks out because you’ve got a contractual obligation to provide Daleks… For a child, a year between Dalek stories is an eternity – I remember as a kid saying, ‘Why haven’t they done the Daleks for ages? It’s been four or five weeks’!” (Interestingly, Moffat’s mother-in-law, Beryl Vertue was Nation’s agent in the early 1960s, so negotiated the original rights for the Daleks.)

So it seems unlikely that the Daleks are contractually obliged to appear every series. There remains seasons without Daleks, and where they do appear every series, it’s a technicality – i.e. brief cameos (like the decapitated one in The Wedding of River Song) and whether we class a particular episode as being a part of one season or as its own entity (Resolution, for instance, isn’t included on the Complete Series 11 DVD/Blu-ray).

I don’t know about you, but I’m interested by the idea that the Daleks are more the opponents of Hartnell than of any other Doctor.

Especially as they weren’t always very well done in the Hartnells. They’re beautifully realised in their first outing, when they were directed by Christopher Barry for four episodes and Richard Martin for three. It’s clear from watching the seven parts of The Dead Planet/ The Daleks, or whatever you want to call it, that Martin was strongly influenced by Barry and he directed the Daleks in much the same style (though they’re a bit more clunky in Martin’s final two episodes). But once Martin was let loose on them solo, he messes them up: they’re pretty dreadful in The Dalek Invasion of Earth, with their nasty redesign, their gliding capacity limited by the substitution of big wheels for castors, and their dreadful voices. In fact, the best bits of this story are the bits when the Daleks don’t appear; the Cushing remake served them much better. They’re very clunky, too, in The Chase, which Martin also directed. It took Douglas Camfield in The Daleks’ Master Plan to restore them to their former glories. (It’s difficult to make a judgement about the single episode Mission to the Unknown as it’s lost, though the 2019 remake is wonderful.) The only time the Daleks were badly done after Hartnell’s time was in The Day of the Daleks: they’re too static and the voices are rotten, but they’re still better than Martin’s efforts and director Paul Bernard corrected his mistakes with Day when they appeared in Frontier in Space.

Were the BBC contractually obliged to feature the Daleks in every series? No; in fact, there were more seasons of Classic Who without them than with them. And even in NuWho, they don’t appear every year: we can put their increased appearances down to their commercial viability and the fact they still pull in viewers. To not use them would be madness. Their heyday was in the Sixties, with a revival in Pertwee’s time; after that, they only popped up occasionally.

But never mind. They’re fab. I love the Daleks and I bet you do too.

This website uses cookies to improve your experience while you navigate through the website. Out of these, the cookies that are categorized as necessary are stored on your browser as they are essential for the working of basic functionalities of the website. We also use third-party cookies that help us analyze and understand how you use this website. These cookies will be stored in your browser only with your consent. You also have the option to opt-out of these cookies. But opting out of some of these cookies may affect your browsing experience.
Necessary Always Enabled
Necessary cookies are absolutely essential for the website to function properly. These cookies ensure basic functionalities and security features of the website, anonymously.
Functional
Functional cookies help to perform certain functionalities like sharing the content of the website on social media platforms, collect feedbacks, and other third-party features.
Performance
Performance cookies are used to understand and analyze the key performance indexes of the website which helps in delivering a better user experience for the visitors.
Analytics
Analytical cookies are used to understand how visitors interact with the website. These cookies help provide information on metrics the number of visitors, bounce rate, traffic source, etc.
Advertisement
Advertisement cookies are used to provide visitors with relevant ads and marketing campaigns. These cookies track visitors across websites and collect information to provide customized ads.
Others
Other uncategorized cookies are those that are being analyzed and have not been classified into a category as yet.
SAVE & ACCEPT
Frequently Asked Questions