As any good Doctor Who fan knows, there is life on Mars. But the Flood? The Osirans? Microbes? Pretenders to the throne! The original Martians are, of course, the Ice Warriors.
And those armoured reptiles are celebrating their 50th anniversary, their debut serial – imaginatively titled The Ice Warriors – beginning on 11th November 1967. Sadly, two episodes of this six-part story are missing; fortunately, they were animated for the DVD release in 2013, so you can watch it in full.
Now, presuming you’re heading to THE 50TH ANNIVERSARY OF THE ICE WARRIORS OFFICIAL CELEBRATION party tonight (you got the invite, right?), you’ll need to know what you’re talking about. Extensive knowledge of other mediums might make the guest speaker, Lord Xxriagh somewhat suspicious, so we’ll focus on the Martians’ TV appearances.
Here, we return to The Ice Warriors, in which a clan are discovered buried in a glacier and, once woken, attempt to make Earth their home, with Mars apparently now dead. Of course, we all know them as the Ice Warriors, but that title was bestowed upon them by one of the scientists, Walters (Malcolm Taylor) – the name was soon adopted by the race, and many others, as their proper identification. Which seems a tad odd. (A similar mistake was made in 1970 when the Silurians were incorrectly named. That instance, however, has been addressed in the 2005- present era of Doctor Who – notably in The Hungry Earth/ Cold Blood, where the moniker, “Homo Reptilia” is used instead – more often than the mishaps with the Martians.) 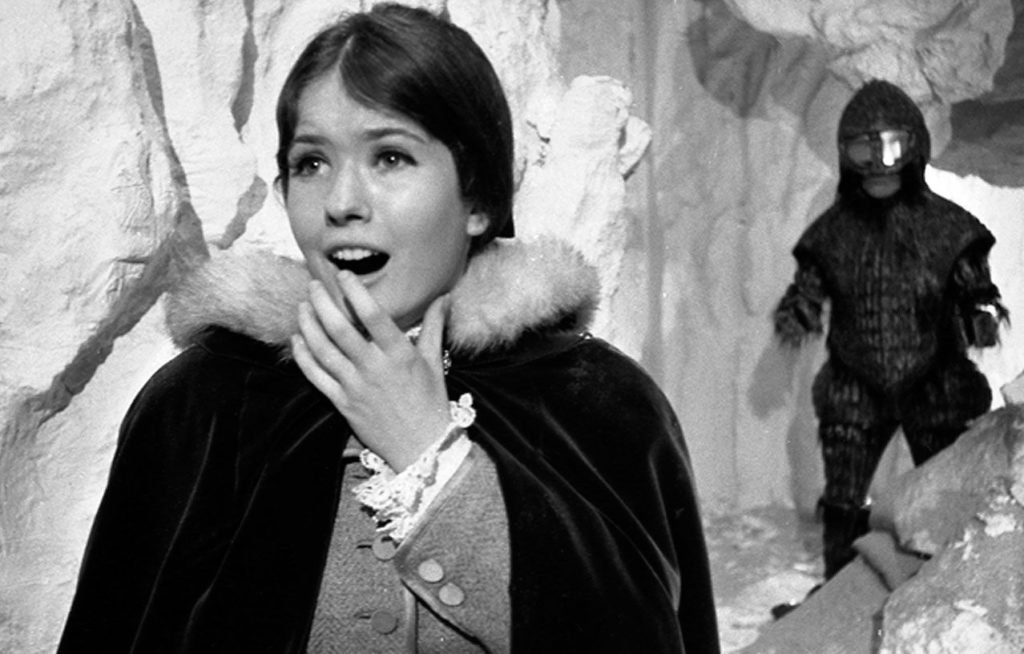 Written by Brian Hayles, The Ice Warriors starred the wonderful Bernard Bresslaw as Varga, leader of the Ice Warriors… and the original costume used in the serial was later uncovered and restored for exhibition at the Doctor Who Experience!
While the Second Doctor (Patrick Troughton) thwarted the aliens’ plans, the race proved popular enough to return the following season.
1969’s The Seeds of Death once more saw the Warriors stake a claim to the Earth, this time using the moon as an invasion outpost; with our home-planet reliant on T-Mat, a teleportation system ferrying humans across the globe – and controlled by a base on our natural satellite. The Doctor, Zoe (Wendy Padbury), and Jamie (Frazer Hines) must get to the moon using a rare rocket, mankind having given up on space travel, and subsequently stop the Ice Warriors’ invasion.
The Martians’ costumes were apparently very costly, and so this second serial aimed to justify the expense. It also helped to establish them as an iconic monster from Troughton’s tenure, hence their inclusion in The War Games (1969) as an example of the evils the Doctor has faced defending the Earth.
However, their next appearance found the TARDIS on another planet: Peladon. The Ice Warriors came back for the Third Doctor’s era in The Curse of Peladon (1972) and its sequel, The Monster of Peladon (1974), both of which embroiled the Time Lord in the politics of the Galactic Federation.
Oh, and the Doctor’s exposed as something of a racist.
Okay, that’s not entirely fair, but he does let his past experiences with different members of the Ice Warrior race cloud his judgement. He’s prejudice. For The Curse of Peladon, he’s wrong. But Hayles adheres to the status quo for The Monster of Peladon. 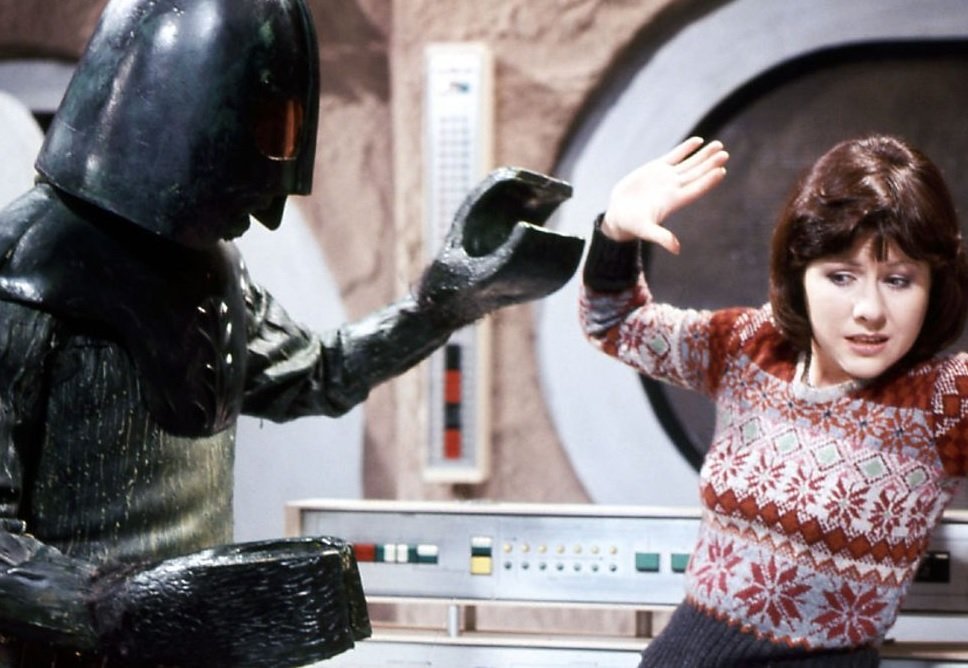 Either way, Hayles gave us a great cast of new aliens too, notably including Alpha Centauri (played by Stuart Fell and voiced by Ysanne Churchman), a hermaphrodite hexapod and delegate for the Federation.
The Ice Warriors proved themselves to be in the same league of quintessential Doctor Who monsters as the Silurians, Great Intelligence, and Autons. But it would be nearly 40 years until their televisual return (although they featured in other mediums, including novels, comic strips, and audio).
2013: the 50th anniversary of Doctor Who. With Cold War, Mark Gatiss (The Unquiet Dead; Victory of the Daleks) became the first person, apart from their creator, Brian Hayles, to write a full-length TV adventure featuring the Ice Warriors. As a big fan of the Second and Third Doctor’s stories, Gatiss convinced showrunner, Steven Moffat to let him bring them back, Moffat previously believing their larger, lumbering bodies didn’t provide a strong enough threat for our quick-witted hero.
Even then, Cold War only includes one Warrior: Grand Marshall Skaldak, the sovereign of the Tharseesian Caste and vanquisher of the Phobos Heresy, and, according to the Eleventh Doctor (Matt Smith), the Martians’ greatest hero.
Unsurprisingly, the episode finds the Doctor and Clara (Jenna Coleman) on the edge of war, and Skaldak – trapped on a Soviet submarine, armed with nuclear missiles – could prove the catalyst for the end of the world. And all because one human, Stepashin (Tobias Menzies) attacked him with a cattle prod. Here, we learn the ancient Martian code: “Harm one of us and you harm us all.” 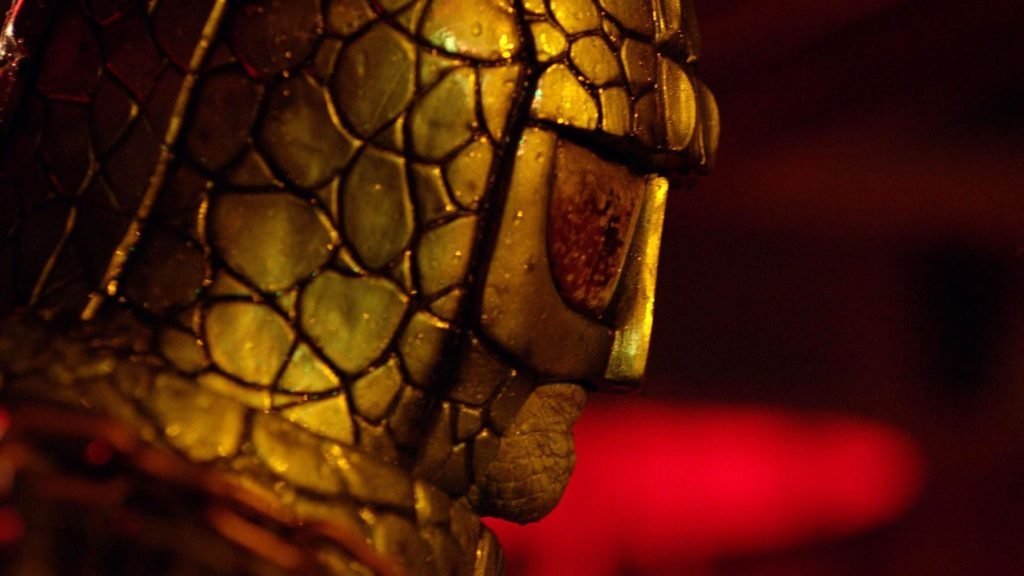 This really cuts to the heart of the Ice Warriors: despite their numerous attempts to take over other people’s territories, they do abide by a strict code of honour. Is the conclusion of Cold War an example of Skaldak behaving honourably? Or does he break the code? That’s up for you to decide…
We next glimpse an Ice Warrior (aka. a publicity shot of Skaldak) amongst the miscellaneous creatures in Trap Street in Face the Raven (2015), and after that, it was down to Mark Gatiss again to deliver a cracking script.
For Peter Capaldi’s last year as the Twelfth Doctor, he faced the Empress of Mars (2017): Iraxxa, the first female example of the species that we’ve encountered – and an Ice Queen, no less! She was aided by a Warrior nicknamed Friday, a reference to the character from Daniel Defoe’s Robinson Crusoe (1719) who acted as a servant. Indeed, Doctor Who‘s Friday served his Queen by awakening her from hibernation. As he’s used Victorians to aid his journey to Mars and find Iraxxa, he’s put in a tricky situation as his Queen attacks the humans.
The Doctor also has to decide which way to turn: with mankind wanting to invade Mars, and Iraxxa intent on killing all those strangers and revive her race, which party does he help?
Gatiss’ tale of Victorian soldiers on the red planet is no doubt influenced by the stories of Jules Verne, but is similarly a love letter to the Peladon tales, specifically The Curse of Peladon. The ending makes certain of that.
And that’s it for the Ice Warriors – at least on television, and at least for now.
But across 50 years, the Martians have become an important part of Doctor Who. By the moons, I honour thee.

by Philip Bates time to read: 4 min
Features On Borrowed Time: Considering the Importance of th…
Features "Is The Wife on Mars?" Doctor Who and th…
6
%d bloggers like this: