New Era Doctor Who Serials to be Adapted as Target Novelisations!

Ready for some extremely exciting news? It appears that Doctor Who serials from the 2005- present era of the show will be novelised in a similar fashion to the classic Target books!
It’s a day many of us never thought would come, but Penguin Books has revealed that four “NuWho” stories – plus City of Death, starring the Fourth Doctor and Romana II – will be released in early 2018. The stories being adapted are Rose; The Christmas Invasion; The Day of the Doctor; and Twice Upon A Time, as well as City of Death, one of the only Classic Who tales to have never been included in the original Target library.
Target books were novelisations, available in hardback but perhaps more widely in paperback, of Doctor Who serials, adding new depths to stories and, for many years, being the only way fans could relive episodes before the days of VHS and DVDs.
This news comes via Penguin’s Australian website which further teases that Rose will be adapted from the original script by Russell T. Davies; The Christmas Invasion by Jenny Colgan; and The Day of the Doctor and Twice Upon A Time by Steven Moffat. We expect City of Death to be a reprinted version of James Goss’ 2015 book.
Each come with the tagline: “Meet the new Doctor Who classics.” Here are the synopses: The key to Earth’s destruction lies buried in its past.

Visiting Paris in 1979, the Doctor and Romana’s hopes for a holiday are soon shattered by armed thugs, a suave and dangerous Count, a plot to steal the Mona Lisa and a world-threatening experiment with time.

Teaming up with a British detective, the Time Lords discover that a ruthless alien plot hatched in Earth’s pre-history has reached its final stage. If Scaroth, last of the Jagaroth, cannot be stopped then the human race is history, along with all life on Earth… “Nice to meet you, Rose. Run for your life!”

In a lair somewhere beneath central London, a malevolent alien intelligence is plotting the end of humanity. Shop window dummies that can move – and kill – are taking up key positions, ready to strike.

Rose Tyler, an ordinary Londoner, is working her shift in a department store, unaware that this is the most important day of her life. She’s about to meet the only man who understands the true nature of the threat facing Earth, a stranger who will open her eyes to all the wonder and terror of the universe – a traveller in time and space known as the Doctor. Earth is under attack by power-hungry aliens. This is no time for the Doctor to be out of action.

When a British space probe is intercepted by a sinister alien vessel on the eve of Christmas, it marks the beginning of an audacious invasion of the Earth by the Sycorax – horrifying marauders from beyond the stars. Within hours, a third of humanity stands on the brink of death with not a single shot fired.

Our planet needs a champion – but the Doctor is not fit for service. He’s just regenerated, delirious in a new body and a dressing gown. Forced into his battered shoes is his friend, Rose Tyler, a girl from a London council estate. Will she save the world from this nightmare before Christmas – or see it destroyed? When the entire universe is at stake, three different Doctors will unite to save it.

The Tenth Doctor is hunting shape-shifting Zygons in Elizabethan England. The Eleventh is investigating a rift in space-time in the present day. And one other – the man they used to be but never speak of – is fighting the Daleks in the darkest days of the Time War. Driven by demons and despair, this battle-scarred Doctor is set to take a devastating decision that will threaten the survival of the entire universe… a decision that not even a Time Lord can take alone.

On this day, the Doctor’s different incarnations will come together to save the Earth… to save the universe… and to save his soul.

Twice Upon A Time 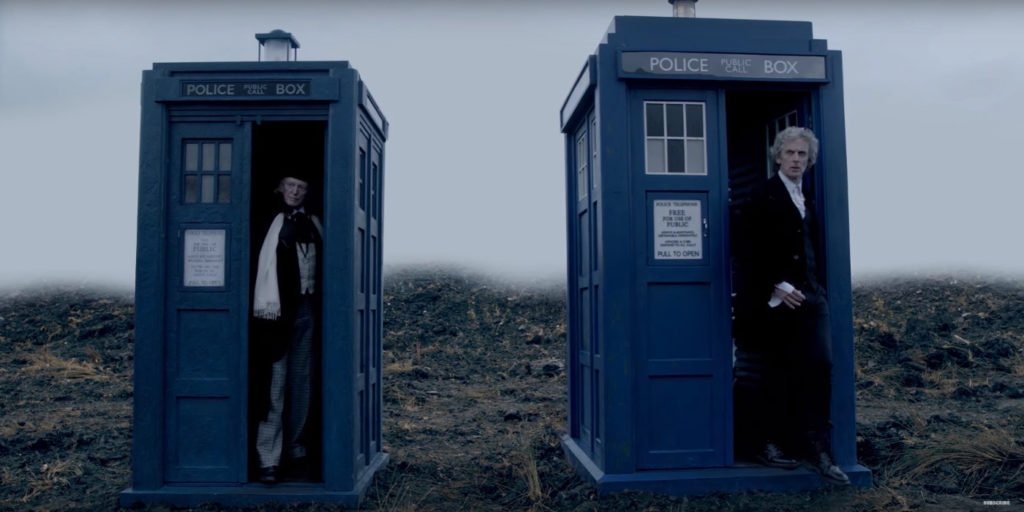 We’re sure a full blurb for the 2017 Christmas special will be unveiled after the festive period is over.
These will be available as paperbacks and digital eBooks, and have a release date of April 2018.
It’s fair to say we’re very very excited about this project, and hope further titles will be forthcoming. Pretty please? Can April hurry up now please?

New Era Doctor Who Serials to be Adapted as Target Novelisations!

by Philip Bates time to read: 3 min
Merchandise Bid on This Impressive Doctor Who Bundle for Child…
Merchandise Obverse Books Sale Continues With First Faction Pa…
8
%d bloggers like this: