It’s not fair to say Doctor Who made me want to write; that passion has been burning inside me for a couple of decades, often summed up best as a need to tell stories. It would be fair to say, however, that Doctor Who relit an interest in screenwriting. It was an idea that I’d had for some time: as a kid, I used to write scripts featuring other people’s characters, without even realising that was an actual job people got paid to do. When Rose debuted on TV in 2005, I felt the urge to do it again.
Not long after – October 2005, in fact – one of my prized possessions was released: the script book for Doctor Who Series 1, a hardcover tome I would pore over time and time again. It was a thing of beauty, perhaps akin to the feeling some got when picking up a Target novel. This was a way to relive The End of the World, The Long Game, and Bad Wolf/ The Parting of the Ways.
It was also a way of absorbing the language of television. It was important, not only in understanding how to script dialogue but also in writing directions.
It was a beautiful book, with introductions by each serial’s writer, a gorgeous cover fronted by Christopher Eccleston’s Ninth Doctor and Billie Piper’s Rose Tyler, and occasional images sprinkled in the margins. Naturally, I still own it, and sometimes gleg through, in an effort of immerse myself in Series 1 again and bring back some truly happy memories. Of course, this wasn’t the first Doctor Who script book: that came in 1988, from Titan Books. The shooting script for An Unearthly Child (or 100,000 BC if you prefer) was presented as Doctor Who: The Scripts – The Tribe of Gum. It was a paperback with contextual details and a nice, if simple, cover focusing on William Hartnell as the First Doctor.
You might think this would open up an exciting new venture for Who merchandise, but if wasn’t until over 18 months later that a second volume, The Tomb of the Cybermen, was released. 1989 also saw editions of The Talons of Weng-Chiang and The Daleks. Obviously, this was a tough time for fandom, as the show was cancelled following Survival; nonetheless, The Daemons followed in 1992, alongside The Masters of Luxor – an experimental oddity in the range, as this was Anthony Coburn’s unmade serial that was rejected in 1963 in favour of The Daleks. The script was rediscovered when they were putting together The Tribe of Gum, so at least this Scripts series meant the revelation of a missing adventure for the Doctor.
(This is without mentioning the Shada script, released as part of a VHS set in 1992.)
The Power of the Daleks came out in 1993, then the sole Seventh Doctor instalment in the series, Ghost Light. Judging by this schedule, it seemed that two such books were pencilled in every year; indeed, the trend continued in 1994 with Galaxy 4 and The Crusade, two stories still incomplete in the BBC Archives. However, anyone waiting for subsequent releases in 1995 and beyond would be disappointed. The range ended, probably as Doctor Who books found a new direction in the 1990s. 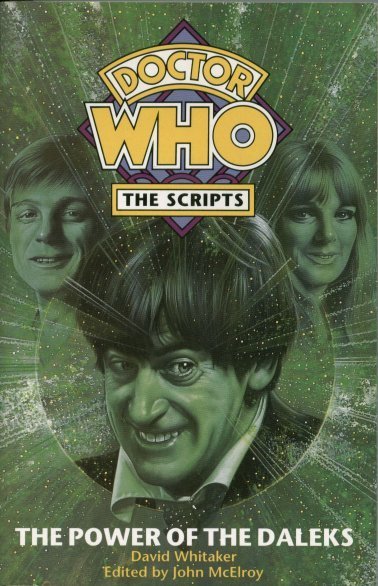 Doctor Who: The TV Movie was at least granted a script book in 1996. Another collection wouldn’t be seen until 2001, when BBC Books issued The Scripts: Tom Baker, 1974/75, a hardcover compilation of stories throughout the Fourth Doctor’s first year, namely Robot, The Ark in Space, The Sontaran Experiment, Genesis of the Daleks, and Revenge of the Cybermen.
This came annotated, with an introduction from Terrance Dicks, and was billed as the “most comprehensive guide to Doctor Who ever published.” Which is stretching it a bit. Still, it was a lovely book, ideal because Season 12 is so beloved.
Aside from four volumes of Big Finish audio scripts (plus another for Dalek Empire), that was it for officially-licensed script books until 2005.
You might expect annual instalments from then on – but alas, the 2005 Shooting Scripts was it. An oasis in a horrible desert.
Okay, so you can find a few scripts online: Smith and Jones, The Magician’s Apprentice/ The Witch’s Familiar, Face the Raven, and Heaven Sent/ Hell Bent are available through the library on the BBC Writers’ Room. Various Russell T. Davies-penned stories from Series 4 and the 2009 specials were uploaded to a site publicising Doctor Who: The Writer’s Tale and its The Final Chapter sequel. Though that’s since been taken offline, cached copies do still exist.
Nonetheless, no further books have been forthcoming, which not only seems a missed merchandising opportunity (one of many, to be fair), but also extremely sad. I can’t help but feel seeing scripts in the shelves of bookstores nationwide would inspire people. Doctor Who is a hugely identifiable brand, its serials mostly out on DVD and Blu-ray, so amateur screenwriters could compare the scripts to how the stories were eventually realised. It would make kids appreciate it as an art, and make writers better known. Some would already recognise names like Steven Moffat, Russell T. Davies, and Mark Gatiss, but the pool of talent working behind the scenes deserves some more recognition. (It might also shut up – for a bit – those who instinctively blame a showrunner for all faults, clearing up some ignorance. Knowing the amount of people who write a series might also mean those put off by a particular showrunner return to the show, to see what other scribes can do with the format.)
Doctor Who: The Shooting Scripts was certainly well-received, so I can only gather it didn’t sell as well as BBC Books initially hoped. Except that doesn’t ring true either, does it? There are lots of seemingly-unsuccessful ventures the BBC persist with, and this book went down well.
Could the answer lie in problems securing the rights for stories from each writer? We know showrunners have to rewrite to a great extent, so arguments we’re not privy to about credits and ongoing rights could account for this omission – and potentially for the lack of Target-like novelisations too. This seems the most likely thing right now, although specifics elude us, and it is pure speculation.
Still, it would be a great shame if further generations couldn’t be educated and inspired because one day, they spotted a gorgeous hardcover book filled with scripts that envisioned the whole of time and space.

by Philip Bates time to read: 4 min
Features What I Learned From Writing An Unpublished Doctor …
Features Trial, Chibnall and Consequences…
0
%d bloggers like this: