As we’ve already discovered, 2016 was full of top-quality drama.
We’ve covered the likes of The A Word and The Durrells, and detailed the successes of Line of Duty and Humans, and in this concluding part, it’s time to see out the year – with espionage, terrorism, and a whack around the head. 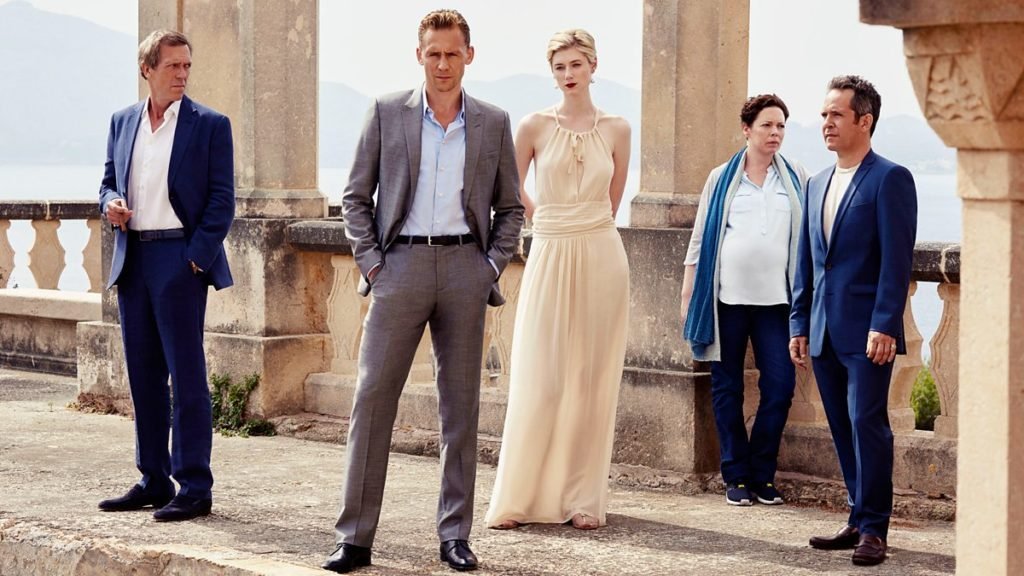 The BBC lavished a huge amount of money on this production, an adaptation of a John Le Carre novel, and it certainly paid off.
Starring Tom Hiddleston as Jonathan Pine and Hugh Laurie as arms dealer, Richard Roper, this was always going to attract a huge audience, and this tried to fill the spy-thriller gap left after the Beeb heartlessly cancelled Spooks. It was a different beast altogether, however, taking us to Switzerland, Egypt, Morocco, Spain, and, uhm, Devon. Pine, a hotel night manager – hence the title – goes undercover to pull apart Roper’s governmental influence.
While the story was sometimes a tad slow, its tension, beautiful settings, and great acting meant this nonetheless remained compulsive viewing. Olivia Colman (The Eleventh Hour) was particularly praised for her part as Angela Burr, while the show also starred David Harewood (The End of Time), Tobias Menzies (Cold War), Russell Tovey (Voyage of the Damned), Katherine Kelly (Class), and Sherlock‘s Jonathan Aris.

Lacey Turner was the original star of Our Girl, but when she left at the conclusion of Series 1, she left a big hole in the programme. Michelle Keegan, fortunately, proved more than capable of filling it.
She plays Georgie Lane, an army medic sent on a humanitarian tour of Kenya; writer, Tony Grounds does an incredible job racking up the tension, and Series 2, Episode 1’s cliffhanger is wonderfully played. The second episode is the real gem, however, showing the horror of war.
Its remaining episodes brings the action back to the UK, turning this drama about war into one about terrorism, a change of premise which other shows might struggle with but Our Girl does admirably. Airing in September and October 2016, the five-episode run is shocking, mind-opening, and haunting TV, one of the rare programmes that leaves a lasting impression, and sheds new light on the world around you.
Also, Sean Gilder plays Georgie’s dad, so you can yell, “look – the Sycorax leader from The Christmas Invasion!” at the screen. As Doctor Who is all about time travel, it only feels right to have the rest of the TV shows set in the past. Perhaps the most notable, and certainly the most attention-grabbing, is Poldark, the latest adaptation of the Winston Graham novels by Debbie Horsfield.
Aidan Turner is the core reason Poldark‘s nabbed so many headlines (although a controversial rape-not-rape scene also got the column inches) and it’s a shame that so many reviews basically consist of the words, “ooh, ain’t he ‘andsome?” – a shame because the shows plots are brilliant, and the direction even better (Smith and Jones‘ Charles Palmer and Let’s Kill Hitler‘s Richard Senior work on Series 2). It helps, of course, that it’s set in Cornwall, which permanently looks gorgeous.
It’s got a fantastic cast too, including Eleanor Tomlinson (The Sarah Jane Adventures), Gabriella Wilde (The Vampires of Venice), Richard Hope (The Hungry Earth/ Cold Blood), Pip Torrens (Human Nature/ The Family of Blood), Amelia Clarkson (The Sarah Jane Adventures), and Phil Davies (The Fires of Pompeii). Series 2 did, however, kill off the show’s best character, which is a black mark against it…

Poldark is actually pretty bleak, but if we’re comparing gritty historicals, Ripper Street takes the crown. Then gets it all bashed up, covered in blood.
I’ve been a big fan of Matthew Macfadyen since his Spooks days, and he leads this dark drama as DI Edmund Reid, shadowed by Jerome Flynn’s Bennet Drake and Adam Rothenberg’s Captain Homer Jackson. The programme, created by Richard Warlow, has gone through some turbulent times, but it’s not reflected negatively on the storylines. The BBC cancelled it after its second series, but Amazon Prime revived it, in association with the Beeb, maybe realising its mistake but equally knowing another company taking the brunt of the costs would make the corporation look good in the eyes of the UK government (and the license fee payers).
It was a savvy move because the final two seasons – Series 4 screened on the BBC, while Series 5 is on Prime, but will be aired on terrestrial in 2017 – gave us some of the most memorable and shocking moments in recent TV history.
The show co-stars MyAnna Buring (The Impossible Planet/ The Satan Pit), David Warner (Cold War), and Sherlock‘s Louise Brealey. 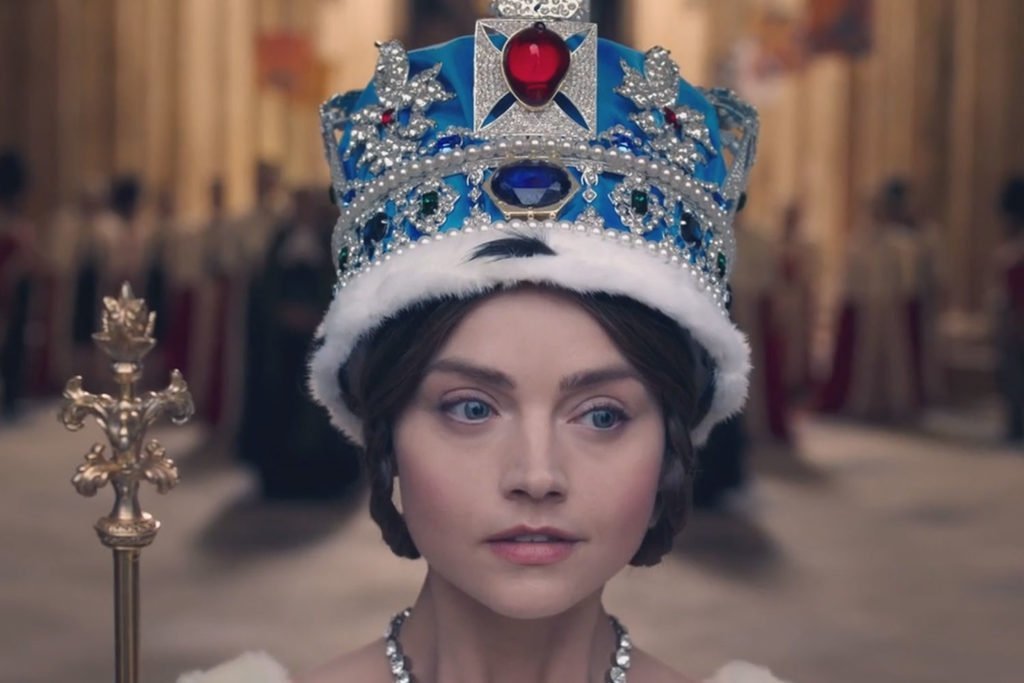 When Jenna Coleman left her role as Clara Oswald in Doctor Who, we all knew she had a bright future. We weren’t quite expecting her next part to come so soon, and be so high-profile. In this flashy ITV show, Jenna plays Queen Victoria, with Tom Hughes (Cemetery Junction) as her Prince Albert, and written by novelist, Daisy Goodwin (The Fortune Hunter).
As Netflix’s The Crown charts the life of Queen Elizabeth II, Victoria Series 1 tells the story of Queen Victoria’s ascension to the throne at the age of just 18, her relationship with Prince Albert, and the birth of their daughter, Victoria. Its eight episodes attracted between 7 and 8 million viewers, resulting in ITV commissioning a second series and a Christmas special, both to follow this year.
Aside from the obvious Doctor Who connection, Victoria co-stars Nichola McAuliffe (The Sound of Drums), Eve Myles (Torchwood), Simon Paisley-Day (The End of the World; Face the Raven), David Bamber (Mummy on the Orient Express), Tommy Knight (The Sarah Jane Adventures), and Adrian Schiller (The Doctor’s Wife).

The Witness for the Prosecution

I love an Agatha Christie adaptation, and, after watching the sublime BBC version of And Then There Were None over Christmas 2015, I was overjoyed to hear more adaptations were on the way. This second, The Witness for the Prosecution, is based on the short story of the same name; the original text is fantastic, but also fewer than 30 pages. So how would that translate across two hour-long episodes?
Fortunately, I had faith in Sarah Phelps (The Casual Vacancy). And it paid off.
Okay, the first episode is slightly slower than you’d hope for, but the concluding part is incredible. Phelps adds masterstrokes to Agatha’s already-genius plot that revolves around the chilling death of Emily French, played here by Kim Cattrall. The other major players are Andrea Riseborough as Romaine, Billy Howle as Leonard Vole, and Monica Dolan as Janet McIntrye, and you’ll also see David Haig (The Leisure Hive) as Sir Charles Carter.
But Toby Jones (Amy’s Choice) steals the show as Mr. Mayhew, giving a nuanced and unutterably sad and lonely performance. It’s genuinely haunting.

We couldn’t include everything, of course, but here are a few other 2016 shows you should watch: the second series of The Missing, starring Time Heist‘s Keeley Hawes and The Next Doctor‘s David Morrissey, garnered plenty of tabloid space; so, too, did the final series of The Fall, with Midnight‘s Colin Morgan, The Day of the Doctor‘s Jonjo O’Neill, and Ruth Bradley (Big Finish companion); Anna Maxwell-Martin (The Long Game) starred in the pilot of Motherland; War and Peace featured James Norton (Cold War), Rebecca Front (The Zygon Invasion), Pip Torrens (Human Nature/ The Family of Blood), and An Adventure in Space and Time‘s Brian Cox; and 2016’s The Hollow Crown: The War of the Roses triptych starred Sophie Okenedo (The Beast Below), Hugh Bonneville (The Curse of the Black Spot), Michael Gambon (A Christmas Carol), Benedict Cumberbatch (Sherlock), Jason Watkins (Nightmare in Silver), and Keeley Hawes.
Meanwhile, Penny Dreadful, with Billie Piper (Rose Tyler) and Helen McRory (The Vampires of Venice), concluded with its third series; presenters on the BBC1 comedy show, Have I Got News for You?, included David Tennant (Tenth Doctor), Alexander Armstrong (The Doctor, the Widow, and the Wardrobe), and Martin Clunes (Snakedance); Robert Glenister (The Caves of Androzani), Lindsay Duncan (The Waters of Mars), and Charity Wakefield (The Return of Doctor Mysterio) were all in Close to the Enemy; Toby Jones fronted the BBC adaptation of Conrad’s The Secret Agent, alongside Tom Goodman-Hill (The Unicorn and the Wasp) and George Costigan (Voyage of the Damned); and the unusual comedy, Love, Nina starred Faye Marsay (Last Christmas).
Sherlock just about makes the list, with The Abominable Bride screening on New Year’s Day 2016; Elizabeth Berrington (The Doctor’s Wife) and Pooky Quesnel (Class) joined Colin Morgan in The Living and the Dead; James Norton was also in To Walk Invisible with Jonathan Pryce (The Curse of Fatal Death); Sophie Okenedo went Undercover with Mark Bonnar (The Rebel Flesh/ The Almost People) and Angel Coulby (The Girl in the Fireplace); Russell T. Davies presented his star-studded version of A Midsummer Night’s Dream, starring Matt Lucas (Nardole), Bernard Cribbins (Wilfred Mott), Colin McFarlane (Under the Lake/ Before the Flood), Eleanor Matsuura (The Sontaran Stratagem/ The Poison Sky), Richard Wilson (The Empty Child/ The Doctor Dances), and Nonso Anozie (voice of King Hydroflax in The Husbands of River Song); Inside No. 9‘s 1970s-esque special, The Devil of Christmas, starred Jessica Raine (Hide), Rula Lenska (Resurrection of the Daleks), and Derek Jacobi (Utopia), alongside writers, Reece Shearsmith (Sleep No More) and Steve Pemberton (Silence in the Library/ Forest of the Dead); and Daredevil Season 2, on Netflix now, saw the Man Without Fear meet Elektra and the Punisher, in episodes directed by Euros Lyn (Tooth and Claw), Andy Goddard (The Next Doctor), and Peter Hoar (A Good Man Goes to War).
And we can’t forget about Doctor Who spin-off, Class either! Yep, 2016 has been quite a year.

by Philip Bates time to read: 6 min
Features The Never Ending Story of K9
Features 2016 TV Shows from Who Alumni You Have to Watch: P…
7
%d bloggers like this: